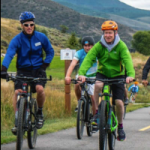 July 21, 2021 – A paved trail system aiming to run from Breckenridge to Aspen became much more likely following a decision by elected officials to issue $20 million to $22 million in bonds to see Eagle County’s portion realized. But it will take approximately $26 million to complete the unfinished portions of the Eagle Valley Trail